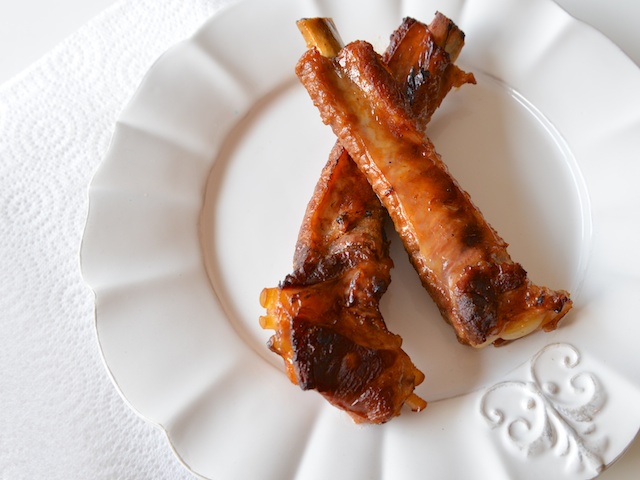 It’s official – we’ve had the coldest spring in 50 years here in the UK. So we haven’t exactly been firing up the barbecue on a regular basis. In fact, I think we have cooked outside exactly twice this year.

Instead, I’ve been making these oven-baked ribs quite regularly. They are satisfyingly sticky and caramelized, and are a big hit with the younger generation.

I use tamari soy sauce in this recipe, which is a gluten free, darker and more concentrated type of soy sauce. (Regular soy sauce typically contains wheat.) While I am not a fan of soy milk and other soya-based substitution products, I have no issue with soya-based condiments such as tamari sauce or miso, so long as they are well tolerated. Unfortunately some individuals with dairy or gluten intolerance find they are also intolerant to soy. Soy is not allowed on the GAPS diet, but if you are following a gluten free or GFCF diet and are not intolerant to soy, then tamari sauce is most definitely your friend.

Combine the orange juice, tamari sauce, honey and star anise in a roasting tray and mix well. Add the spare ribs and give it all a good stir before covering with tin foil. Bake for around two hours.

Increase the heat to 220°C/425°F/gas mark 7. Remove the tin foil and cook for another 45 minutes, stirring every 5 minutes, until the ribs are well-browned.

View all posts by Jenny

< Previous Next >
+ Add your own event Eventbrite

Please click here to be redirected to the Brain Food Amazon Store.